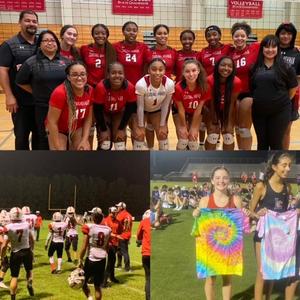 Another fantastic week for the Cardinals! #BackTheBird
Cross Country- Caroline Timmons wins here second race in a row by winning the Pelican's Invitational at Lexington High School this past Tuesday.  A very impressive win against a really good competitive field!  Next up is the Highlander Invitational on Saturday morning.
Varsity Girls Golf- Looks to stay hot this week as they are on the road at Pinewood Prep on Tuesday and then a home match on Thursday at Wildewood Country Club vs Lugoff-Elgin.  Payton Burch leading the way with an impressive start to her season!
JV and Varsity Tennis- Has a busy week this week with 3 matches in a row Tuesday, Wednesday and Thursday.  Be sure to get out to the August Family Tennis Center and support your JV and Varsity Girls tennis!
Volleyball- The Cardinal Newman Volleyball Varsity Volleyball team claimed the 2022 Porter-Gaud Invitational Tournament Championship! The team defeated: St. Joseph, Bishop England, Porter-Gaud, Lugoff-Elgin, and North Myrtle Beach in the first and second round of pool play while tying with Lucy Beckham the first day.
In the gold semi-finals, the Lady Cardinals swept St. Joseph 25-11, 25-17 in the gold semi-finals. With support from spirted crowds, the Lady Cardinals battled against a stacked River Bluff team winning 25-23 and 25-23 in the gold championship!
Anna Logan Gillens and Christiana Greene led our offense and were named to the All-Tournament Team! Jayden Johnson was named tournament MVP for her consistency and assists! Johnson is the current assist leader in South Carolina.  Erin Allert, Karlese Sears, Danielle Dais, and Leila Hargrove contributed key blocks and a dynamic offense. Victoria Harris led the team with top passing and defense!  The team has a day or two of rest, and then will go on the road to face Augusta Christian on Tuesday 9/6 at 5:30 PM.
The Lady Cardinals will host its first home varsity matches on Wednesday 9/7 playing Nation Ford at 5:30 PM and River Bluff at 7:30 PM!  Also this week they are on the road at August Christian on Tuesday, Ben Lippen on Thursday and Hillcrest Tournament on Saturday!
Middle School and JV Volleyball also have a busy week this week as they are on the road as well most of the week.  Shoutout the MS Volleyball (Upper Division) Team on their first win of the season vs Thomas Sumter this past Thursday!
Varsity Football earns a big conference win on the road at Trinity Collegiate Friday Night 58-46.  This is the first win for new head coach Cory Helms!  Senior RB AJ Reyes has a record setting night scoring 6 rushing Touchdowns (new school single game record) and also tallied 315 yards on the ground as well.  Be sure to get out and vote for AJ as the HS Football Player of the week for the State Newspaper.  Next up is a home game Friday Night 730pm vs Northwood Academy.  Tailgate at Alumni Hall starts at 6pm and the gates will open at 615pm.  Tickets available in the link below.